“My beloved thrust his hand into the opening, and my insides ached for him. I arose to open to my beloved, and my hands dripped with myrrh, my fingers with liquid myrrh, upon the handles of the bolt” (Song of Solomon/Song of Songs 5:4-5).

So according to the Bible, you don’t have to choose between loving God and really good sex! At its best sex is experiencing the most intimate of relationships between two people. God’s relationship with us is even more intimate than that! So it’s no surprise that sex has served as a powerful metaphor for our relationship with God. Here’s a revealing account from St. Teresa of Avila (1515-1582):

“I saw in [the angel’s] hand a long spear of gold, and at the iron’s point there seemed to be a little fire. He appeared to me to be thrusting it at times into my heart, and to pierce my very entrails; when he drew it out, he seemed to draw them out also, and to leave me all on fire with a great love of God. The pain was so great, that it made me moan; and yet so surpassing was the sweetness of this excessive pain, that I could not wish to be rid of it. The soul is satisfied now with nothing less than God.” 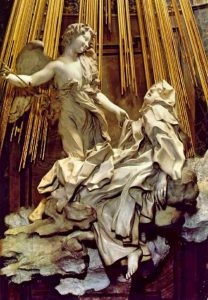 Hmmmm! You can view her account simply as a classic case of sublimation: You can say, “She can’t accept her sexuality, so she subconsciously reinterprets the experience in terms of spirituality, but it’s really just about sex.” I don’t think that’s the whole truth. The reason we can spiritualize sexuality, and vice versa, is because both have to do with exceedingly intimate relationships. If God is more intimately involved with us than any other, as my tradition teaches, how could the intimacy of sex not be a sacrament of our intimacy with God? With God in the picture, sex can’t ever be just about sex. Sometimes people talk about God to avoid talking about sex, and sometimes they talk about sex to avoid talking about God. But it’s really okay to talk about both.

So why do so many of us blush when the subject arises? Why are you (perhaps) giggling because I said “arises”? Why is the topic considered off-limits in polite society? Maybe it’s for the same reasons that talking about your relationship with God, or your doubts about God, can make people feel awkward. They’re both topics that make us feel really, really vulnerable, exposed. You’re letting people glimpse something about you that they could use to hurt you if they chose.

With sex (and sexuality), as with spirituality, it’s very easy to get hurt. That’s why in almost every culture both sex and spirituality are protected by rules. Sometimes those rules look like knee-jerk reactions to an encounter when somebody got hurt. But other rules reflect a deep wisdom about how important sex is in our lives with one another and in our lives with God.

While many right-wing Christians won’t admit it, the rules we’ve used to channel both our sexuality and our spirituality have changed countless times over the centuries, along with changing assumptions. Today we live in a time when hardly any custom goes unquestioned, and our attitudes toward sexuality have shifted dramatically. (Most of today’s conservative evangelicals would have looked like licentious liberals to people living in the 1800s.) When everything’s changing, it’s best to look to some enduring ideas or principles to keep track of who you are, and that, I suggest, is what we should do when it comes to sexuality.

Here’s one of the most important enduring ideas in the whole Bible, as articulated by, of all people, St. Paul. When you quote him out of context, Paul can look totally out of touch on the whole topic of sex. But he was working with the customs of his time, not trying to change everything at once, and he knew that people shouldn’t equate all of his words with God’s (1 Corinthians 7:12 & 25). The heart of Paul’s teaching, like the heart of Jesus’ teaching, was about love.

“Owe no one anything, except to love one another; for the one who loves another has fulfilled the law. The commandments, ‘You shall not commit adultery; You shall not murder; You shall not steal; You shall not covet’; and any other commandment, are summed up in this word, ‘Love you neighbor as yourself’. Love does no wrong to a neighbor; therefore, love is the fulfilling of the law” (Romans 13:8-10).

Love one another. This, said Paul, is one of the enduring ideas that tied his Bible together. He believed that everything in his Bible (roughly what Christians now call the Old Testament) was pointing to the day when all people everywhere could learn to care for one another because they were sharing in a common life animated by God’s Spirit in Jesus Christ. They would be moved to love one another, not by threats, but by God’s intimate love. He thought the day had arrived when people of different cultures could ignore a great deal of his own Bible’s instructions because they didn’t apply to other cultures. The only instruction that applied everywhere was to celebrate God’s love by loving one another, by becoming one body in Jesus Christ.

So when it comes to sex, here’s the enduring idea:

Casual sex may scratch an itch or two, but it’s still not good sex. Why? Your sexual desires reflect a much deeper desire for intimate love with another. You have a deep desire to join your body with another whom you desire and who desires you just as deeply. You want both of you to be so intimately joined that you need never fear abandonment or harm from each other. You can’t fulfill that deep desire unless you move beyond scratching itches. Good sex isn’t casual.

And one more enduring idea:

Good sex requires two people choosing to risk total vulnerability to each other. It needs a safe space where we can afford that kind of risk. That’s why rape and abuse don’t even count as sex—they’re acts of violence. And that’s why we have marriage. It’s not because somebody’s sacred book prescribed marriage. It’s because good sex, sex at its most fulfilling, needs a safe space where promises are kept and nobody is harmed or abandoned.

I’m an Episcopal Priest. I also work with the Evangelical Lutheran Church in America. Both our Churches’ attitudes toward sexuality are considered too permissive by many other Christians. But we see ourselves as trying to be more consistent about the enduring ideas we find in our sacred writings and in our broader heritage. We believe that sex is divine, and that because it’s divine, we should act accordingly. We believe that good sex needs a safe space, so we uphold marriage and speak against using sex to discount or harm others or yourself. We don’t believe that good sex is only available to straight or cisgendered couples. We have openly LGBT+ members and openly LGBT+ clergy in faithful relationships, and we don’t see any of them as second class. We haven’t figured everything out, but we’re listening to our members and our neighbors as we keep working out how to love one another responsibly.