The writers of the early church knew Genesis 1 couldn’t be a literal description.

St. Augustine (ca. 415): “No Christian will dare say that the narrative must not be taken in a figurative sense. For St. Paul says: ‘Now all these things that happened … were symbolic.’ … What meaning other than allegorical have the words: ‘In the beginning God created heaven and earth?'” (On the Literal Meaning of Genesis, 1.1-1.2)

Evangelical apologist C. S. Lewis agreed: “The first chapters of Genesis, no doubt, give the story of creation in the form of a folk-tale.”

It describes the earth as a lumpy land mass, supported by pillars, surrounded by vast, chaotic waters on all sides, including a huge body of water over our heads that’s kept from drowning us by a transparent dome (“firmament”), studded with stars, sun and moon, with “windows” in it that can be opened to let some of the water in as rain.

If you wanted to insist that Genesis is literally true, you’d have to go way further than the Creation Museum. You’d have to defend the idea that we all live under this giant, transparent dome! You’d have to take the blue of the sky as evidence of that huge body of water over our heads! (Scroll down for some images.)

Good luck with that.

In other words, Genesis 1 uses the terms of an ancient worldview to say symbolically that from the very beginning, without literally having vocal chords, God was in some sort of communication with a vast, dark, shapeless, fluid mess, summoning it to become a luminous, shapely, creative community. God “spoke” to the chaos creatively, the chaos responded creatively, and that’s how we got this intricately interwoven community we call the world, with all its appealing and devastating surprises.

Like those ancient storytellers, we say that’s what happened way back then, because we see a version of it it happening now. We keep seeing luminous, shapely, creative community emerging from the vast, dark, shapeless, fluid messiness of everyday life.

Nobody controls it—it’s not a dialogue if it’s controlled—and yet it seems to be going somewhere, no matter how many twists and turns it takes.

It’s one of the most basic storylines underlying the entire Bible. We hear it every time our community gathers for the Eucharist in our prayer of consecration: God’s constant communication summons the world from chaos into community. (“Your Spirit moved over the deep and brought all things into being.”) The world turns chaotic again. (“But we rebelled against you and wandered far away.”) And again God summons the world from chaos into community, over and over. (“And yet as a mother cares for her children you would not forget us. Time and again you called us to live in the fullness of your love.”)

For us who gather in Christ’s name this storyline is lived as God draws us into the surprisingly renewed and renewing life of an executed criminal, Jesus, who through broken bread and fluid wine still summons us from chaos into the community known as the Body of Christ; the meal itself is both a realization and a summons to community through brokenness and fluidity.

This is God’s very being for us: the relentless, self-sacrificing summoning from chaos into community.

That’s the ongoing dialogue we celebrate repeatedly. It’s a concentrated form of the dialogue happening everywhere. It’s not a literal dialogue. (Remember St. Augustine?) But calling it a dialogue deepens our awareness, opens us us to the utter mystery of what happens around, in and through us to make us … us, not just a nameless bunch of molecules.

When Darwin introduced his theory of natural selection he was inadvertently calling attention to the more easily observable aspects of this dialogue: The very nature of things displays a mutually selective process, often devastating, yet issuing in unpredictable forms of community.

While some Christians in Darwin’s day saw this as a threat to their faith, others were more receptive. Only a few years later an influential writer in my own Church (Aubrey Moore) wrote: “Darwinism appeared, and, under the guise of a foe, did the work of a friend. It has conferred upon philosophy and religion an inestimable benefit, by showing us that we must choose between two alternatives. Either God is everywhere present in nature, or He is nowhere …. We must frankly return to the Christian doctrine of … the immanence of Divine power in nature from end to end, the belief in a God in Whom not only we, but all things have their being, or we must banish Him altogether.”

Instead of being threatened, many of us, like Moore and these ancient storytellers, call this process, inherent in the very nature of things, not a mechanism but a sort of dialogue, and I don’t think we’re wrong. We just see things in more expansive and engaging terms than could be allowed in the natural sciences.

In Genesis 1 God says this dialogue is not only natural but good. Yes, it can be devastating beyond words, but the dialogue is going somewhere, somewhere good, no matter how many twists and turns it takes. 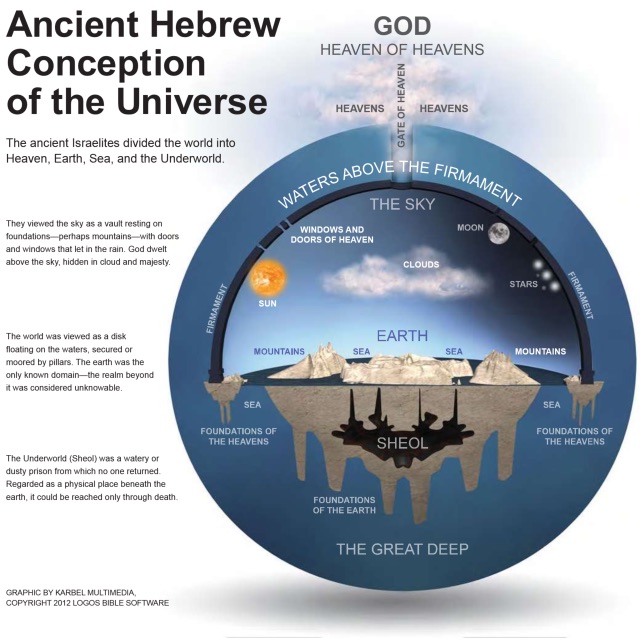