[This is for a course where some of Gordon Kaufman’s works have been assigned.]

This certainly converges with many themes in process theism. In fact, for the most famous process thinker, Alfred North Whitehead, creativity, the happening of “novel togetherness,” is the ultimate category, “the universal of universals,” (Process and Reality [New York: Free Press, 1978 (1929)], p. 21). And Whitehead would agree that creativity is certainly “manifest throughout the cosmos.”

But in process thought creativity is not God—it’s an abstraction that only exists in concrete, more or less inclusive happenings (what I call “ways of newly interacting”). And only one of these sorts of happenings can be called divine, namely the uniquely all-inclusive happening, the uniquely all-inclusive way of newly interacting. All other happenings exhibit their own sorts of creativity, but that does not make them God, neither individually nor collectively.

Kaufman rightly notes that “it would certainly be a mistake to argue that cosmic creativity always manifests love for all the creatures involved: that would be unintelligible, indeed absurd, in the face of all we know about nature ‘red in tooth and claw’ …” (p. 63).

It would of course be absurd to say that of creativity in general, in its countless, uncontrollable and often conflicting manifestations which do indeed result in nature “red in tooth and claw.” But process theists find nothing absurd in saying this of the uniquely all-inclusive way of newly interacting. While essentially non-controlling (and thus in no position to prevent others’ conflicts), the very happening of this unique all-inclusiveness influences every other happening away from conflict and toward reconciliation. Why not call this non-controlling, uniquely all-inclusive influence “love”? Isn’t that what we call non-controllingly inclusive influence when it happens among humans? When, say, two people love each other, each embraces (includes) all that the other is (as much as humanly possible), and that very embrace non-controllingly transforms them both. To be sure, when this is happening immeasurably beyond the human level, calling this inclusiveness “love” is speaking analogically or metaphorically or symbolically (take your pick), but for process theists the similarity is real, experientially real, no matter how great the dissimilarity.

For similar reasons, process theists have no problem speaking of God in quasi-personal terms. That’s because the very idea of a person has been reframed. Process thinkers regard human persons as highly inclusive, self–successive ways of newly interacting. The awareness of self and cosmos that distinguishes us from many other beings is considered a product of this high level of inclusiveness. If that’s what persons are at a human level, why not stretch the word to characterize the likewise self-successive, all-inclusive way of newly interacting? To be sure, all-inclusiveness is immeasurably greater than the high level of inclusiveness humans exhibit, but again, the similarity is real, no matter how great the dissimilarity.

Granted, “the creativity manifest throughout the cosmos” definitely is not “a kind of cosmic person” (p. 48). But again, in process thought creativity is not God, and there is indeed something “kind of” personal, even interpersonal,  characterizing the uniquely all-inclusive way of newly interacting.

Another difference: despite his recognition that there is no such thing as a “raw,” uninterpreted experience, Kaufman still seems (inconsistently?) to equate experience with direct perceptions of particular objects (see An Essay on Theological Method, Third Edition [Atlanta: Scholars Press, 1995], p. 29). Anything else, including any sort of connection, is an imaginative construct added to our direct perceptions of objects, often unavoidably added, but never really experienced. Only objects are experienced.

But for process thinkers objects are themselves creative abstractions from an intimate, participatory awareness of the pluralizing whole, and that whole is not added by us to our experience—it’s experienced as inescapably as any object, in fact more inescapably. Thus Whitehead: “The whole notion of our massive experience conceived as a reaction to clearly envisaged details [i.e., objects] is fallacious. The relationship should be inverted … The primitive stage of discrimination … is the vague grasp of reality, dissecting it into a threefold scheme, namely, ‘The Whole,’ ‘That Other,’ and ‘This-My-Self.’ … This is the vague, basic presentation of the differentiation of existence.”—Alfred North Whitehead, Modes of Thought (New York: Simon & Schuster, 1968 [1938]), pp. 109-110 (online here)

So for Kaufman, both the whole (the world) and its “beyond” (God) are totally constructed from experienced, particular objects. But for process thinkers, it’s the particular objects that are constructed (i.e., creatively abstracted) from the open-ended, pluralizing whole, which is always experienced, however “peripherally,” whenever we experience any so-called object. And in process thought, “the whole” is in a sense its own “beyond,” so there’s no need for an extra construction.

So far I have basically been critiquing Kaufman for not going far enough with his account of creativity. But I also need to recognize that this is one of the strengths of his work. He cautiously develops and commends the idea of cosmic, “serendipitous” creativity by mostly listening to the evolutionary themes that have come to pervade almost all of the natural sciences. This is worked out in admirable detail in his major work, In Face of Mystery (Cambridge, MA: Harvard University Press, 1993), where he draws attention to a number of interpretive choices—“small steps of faith”—involved in creatively articulating a theistic worldview (note that I say “creatively articulating” where he would say “constructing”). This is helpfully  diagrammed in the figure appearing at the end of this post (from p. 287 of that work).

In each of these “small steps” Kaufman doesn’t want to venture very far from what practitioners in these other fields are saying, and he is thus too modest to use this idea of creativity to reframe the very ideas of what the natural sciences are telling us about our place in this vast universe. And his modesty here makes his project more credible to colleagues in fields that typically don’t bother with concepts like “God.” A clear example here is the work of biochemist, and self-described “secular humanist,” Stuart Kauffman, who actually co-taught a course with Gordon Kaufman (no they’re not related—their last names are spelled differently).

So Kaufman’s modesty here can be seen as a strength. His careful listening provides considerable support for the idea that creativity might indeed be, not just local, but cosmic. True, he is not quite so modest when it comes to reframing theological ideas quite radically, but after all, that’s his field. He has the training and credentials to be more assertive when it comes to theology. For process theists, he is too quick to jettison the long-standing dialogical, interpersonal-like aspect that they (and I) find non-negotiable in resorting to God-talk. (He actually has “no serious objections” to an insistence on this more dialogical language as long as it is recognized as “a debatable theological issue”—see In Face of Mystery, pp. 355-356.) But there are also traditional precedents for Kaufman’s “monological” portrayal, which entitle him to develop his God-talk in that direction. In any case, with other fields he mostly wants to let them speak for themselves, without suggesting that he knows what they’re really up to even though they may not notice it. That’s commendably modest.

By comparison, process thought of the sort I am promoting is much more immodest. It really does want to use this idea of creativity to reframe the very ideas of what the natural sciences are telling us about our place in this vast universe. This is not, however, trying to tell physicists (etc.) what their current research programs ought to be or what sorts of conclusions they are entitled to draw within their own fields. It is instead calling attention to and critiquing unexamined “prescientific,” “metaphysical” assumptions—Kaufman’s “small steps of faith”—that physicists and others may be drawing upon when venturing beyond their fields to tell us about our place in the whole scheme of things. I consider this a defensible move, but it’s still undeniably immodest. And so it’s likely to meet with more resistance than Kaufman’s work.

Because of my doctoral work in “post-Popperian” philosophy of science and in what is now called science studies, I am comfortable with immodestly pressing this idea of creativity as far as I can in dialogue with the natural sciences. I don’t mind if it meets with resistance. Why shouldn’t it? That’s not a conversation stopper. But of course, while not alone, I could still be quite wrong, and people who prefer more modesty might be more readily attracted to Kaufman’s work. Both approaches remain debatable theological issues. 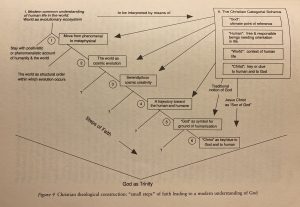