This week’s Gospel reading strings together a whole series of parables. I want to focus on what to me is the most intriguing one, the parable of the mustard seed: “The kingdom of heaven is like a mustard seed that someone took and sowed in his field; it is the smallest of all the seeds, but when it has grown it is the greatest of shrubs and becomes a tree, so that the birds of the air come and make nests in its branches.”

One of my favorite comedies is the Coen Brothers’ movie, “Raising Arizona.” Hi, the main character, falls in love with Ed (short for Edwina), the policewoman who keeps snapping his mugshots as he is repeatedly arrested and sent to prison. They marry after Hi is released from what he hopes is his last prison term, and they move into a house trailer in the Arizona desert. And then, let’s say, interesting complications happen. How could they not? I won’t go into details, but at the very end of the movie Hi dreams of an earthly paradise:

“I dreamt I was as light as the ether—a floating spirit visiting things to come. … [I saw a land] where all parents are strong and wise and capable and all children are happy and beloved. I don’t know. Maybe it was Utah.”

Now if you happen to be from Utah, I hope you’re not insulted when I say that if you asked most people in the world to imagine a paradise on earth, Utah is not the first place that would come to mind.

I’ve looked up pictures of mustard plants. They look a lot like goldenrod, and they’re about the same height at their tallest. They’re also just as common on their native soil. And they’re just as unwelcome if you’re trying to grow anything else, even if their seeds do make a tasty condiment. So here’s Jesus telling us that the kingdom of God, the arrival of God’s common life with us, is like a common, invasive weed—like goldenrod, like dandelions. 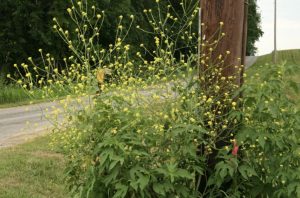 This is a far cry from Ezekiel’s vision of God’s reign as a stately cedar of Lebanon, which is about as impressive a tree as you could find in the Middle East. (The grounds of Downton Abbey’s Highclere Castle are full of them.) 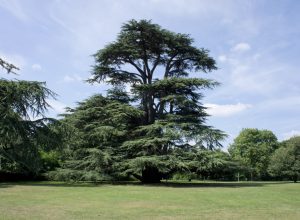 But Jesus wants us to think about the contrast. Ezekiel says, “Under [that cedar] every kind of bird will live; in the shade of its branches will nest winged creatures of every kind” (17:23). Jesus says that the mustard plant “becomes a tree, so that the birds of the air come and make nests in its branches.” Of course mustard plants do not become trees, and the birds of the air do not make nests in their branches. What branches? Jesus knows that and so do his listeners. It’s a parody. Like Hi’s dream of Utah, it’s meant to poke fun at our typical dreams of greatness and at our images of God. Maybe it’s OK to imagine a towering cedar, but don’t take it too seriously. Lighten up.

What we have here are two very different versions of how God works in the world: there’s the loud, pushy version, and then there’s the quiet, persistent version. You can find them both in the Bible and in the traditions of the Church.

The loud, pushy version goes for the big, impressive images like a cedar of Lebanon. It views God as a mighty warrior, definitely a man, living in a perfect place far away from here. And one of these days he’s going to to get fed up with this world, and he’ll show up and kick a lot of behinds. Then he’s going to take over and force everybody to behave. Like Mussolini’s Italy, the trains will definitely run on time.

Then there’s the quiet, persistent version. Its images aren’t that impressive—a mustard plant, for example. This version views God as a loving parent, maybe even as a lover, not exclusively male or female (especially if you read the Bible’s Wisdom literature), living right here with us. There’ll never be a day when God gets fed up with us and takes over. The trains may never run on time. But God is incredibly persistent, like an invasive weed. You can try to kill off dandelions, or goldenrod or mustard plants, but they’ll always outwit you. They keep coming back. We might do better to learn how to get along with them.

In one version God wins once and for all by beating up everybody else and taking control. In the other version God never wins once and for all, never takes control, but still, God never loses. God can’t be permanently killed. We know that now, because we’ve tried it. We even act it out every Sunday when we hold up the bread and break it, only to find that God is still right here with us. So since we can’t get rid of God, we might do better to learn how to get along. Maybe we would do better to give up dreams of beating up and controlling everybody else and follow God’s strategy of incredible, welcoming persistence—if we tried that, maybe we’d never lose.

Now it’s pretty clear that over the centuries the Church has been more attracted to the loud, pushy version of God’s reign. When we thought we had a chance at a Christian empire, we took it. When empires started disintegrating, some of us have still tried to enforce a Christian civilization through legislation. It’s never really worked. Enforcinga particular faith is like trying to get rid of dandelions.

But Jesus himself embodied the quiet, persistent version of God’s reign, not just in parables about mustard plants, but in his whole life, which, by the way, isn’t over yet, because that life is still embodied in the likes of us. Our creeds hint at this, but they only scratch the surface of what it really means.

N. T. Wright is an English Bishop and a brilliant New Testament scholar. He’s also a card-carrying conservative evangelical, which I could never be—well, not any more. But he once said something downright radical. A student cornered him and asked, “Is Jesus God?” And Wright answered, “That’s the wrong question. Instead we should be asking, ‘Is God like Jesus?'” [See The Original Jesus (Grand Rapids: Wm. B. Eerdmans, 1996), pp. 78-79.]

Wright is, um, right. If God has to win by beating up everybody else and taking control, then Jesus’ life doesn’t reflect that God very well, if at all. But if God refuses to lose by letting us do our worst and coming back again and again until we let love fill our lives, if that’s what God is really like, then, and only then, can we see in Jesus “God from God, Light from Light, True God from True God.”

If God’s life really is best embodied in a life given away and given back in love, then that image of the loud, pushy God is nothing more than a caricature, an exaggerated picture. We do find those exaggerated pictures all over the Bible, as well as in our hymnals, but they’re still exaggerations. Don’t take them too seriously. The God who encounters us in Jesus isn’t like that. The God we keep stumbling over in Jesus is more like an invasive weed—like dandelions, or goldenrod, or a mustard plant.